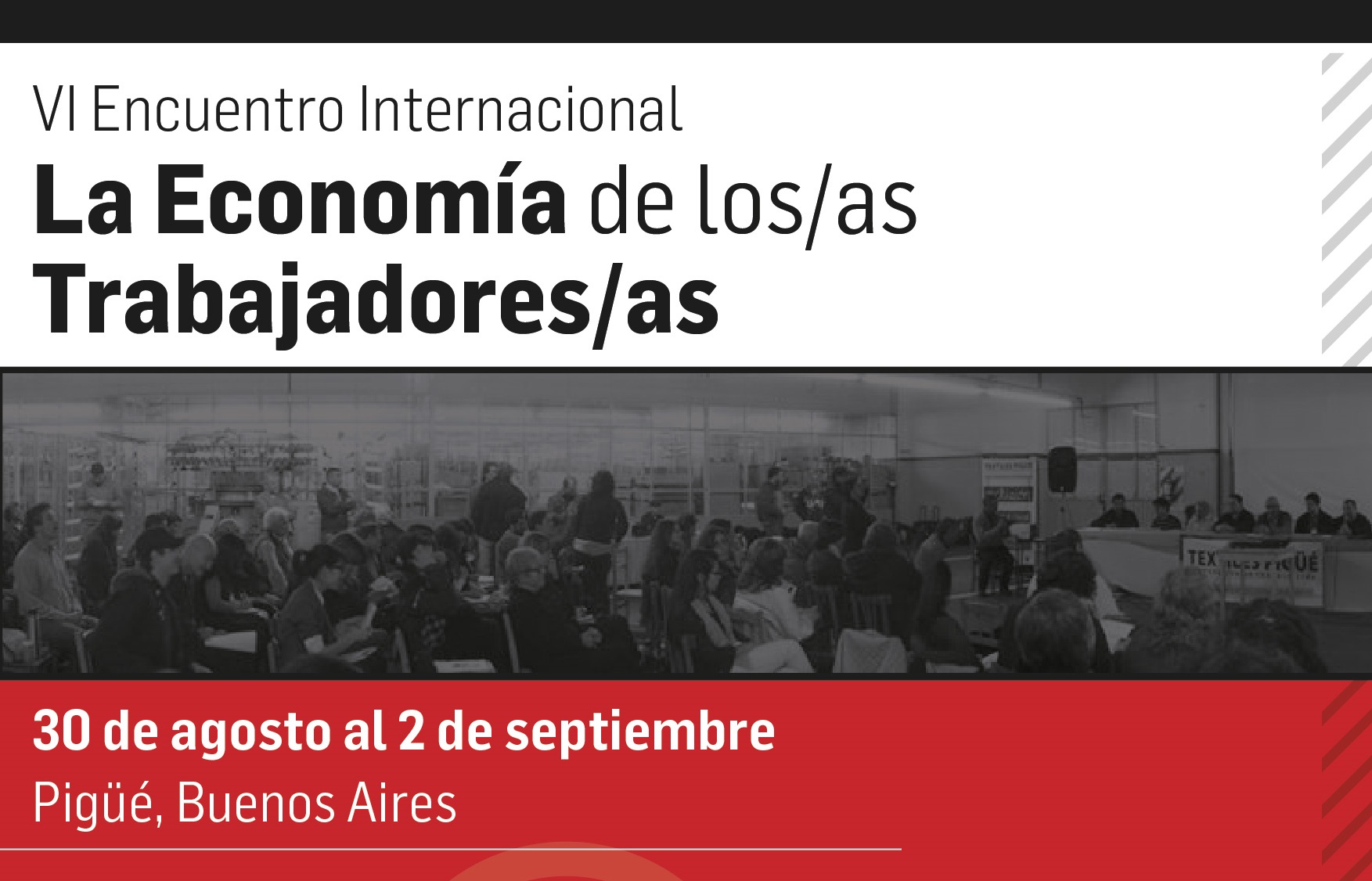 The VI International Gathering of “The Workers’ Economy” will take place in Argentina between August 30 and September 2, 2017. An opening event will be held at the worker-recuperated Hotel BAUEN in the City of Buenos Aires, and the rest of the gathering will continue at the facilities of the Textil Pigüé Cooperative, a worker-recuperated factory in the interior of the province of Buenos Aires. We invite the participation of all workers from recuperated and self-managed enterprises, cooperatives and social and popular economy organizations, as well as trade unions and academics interested in and committed to self-management practices and the project of a new workers’ economy.

This new, sixth edition of the International Gathering of “The Workers’ Economy” will take place ten years after the first edition was organized by the Programa Facultad Abierta (Open University Program) of the Faculty of Philosophy and Letters of the University of Buenos Aires in July 2007. Subsequent editions have taken place in Buenos Aires (2009), Mexico (2011), Brazil (Joao Pessoa, 2013) and Venezuela (Punto Fijo, 2015). Beginning in 2014, regional gatherings have also been taking place in South America, Europe and the Mediterranean, and North and Central America, the last of which were held in October and November 2016 with the participation of representatives from 30 countries.

This new International Gathering will be held at a particular juncture when a workers’ economy based on self-management appears more and more as an alternative to savage capitalism. This is particularly so given that our contemporary capitalist order increasingly condemns the majority of the world’s working people to exploitation, precariousness, and unemployment, while unleashing wars, discrimination and destruction throughout the planet. In Argentina, where the sixth edition of the gathering of “The Workers’ Economy” will take place, one of the world’s most extensive experience of self-management and workers’ recuperations of shops and factories faces a new neoliberal offensive. From there, at this critical moment, we invite you to participate in this new edition of the International Gathering of “The Workers’ Economy,” which intends to bring together and expand on the numerous debates, discussions, and shared experiences of the three most recent regional and earlier International Gatherings, while also aiming to strengthen the organization of our growing world network.

In addition to the sessions that will begin on August 30, the VI International Gathering’s local organizing committee is planning activities and visits to social organizations and worker-recuperated companies in Buenos Aires one week prior to the gathering. The organizing committee will also guarantee transportation logistics for all participants in the city of Buenos Aires and the city of Pigüé, where most of the gathering will take place and which was already the site of the First South American Regional Meeting of “The Workers’ Economy” in October 2014.

Shortly, we will be releasing a full schedule of the VI International Gathering’s themes and discussion topics, the deadlines for presentation and panel proposals, and other organizational details.

For more information, we invite you to go to: www.recuperadasdoc.com.ar, or contact centrodoc@gmail.com and sextoencuentrointernacional@gmail.com.