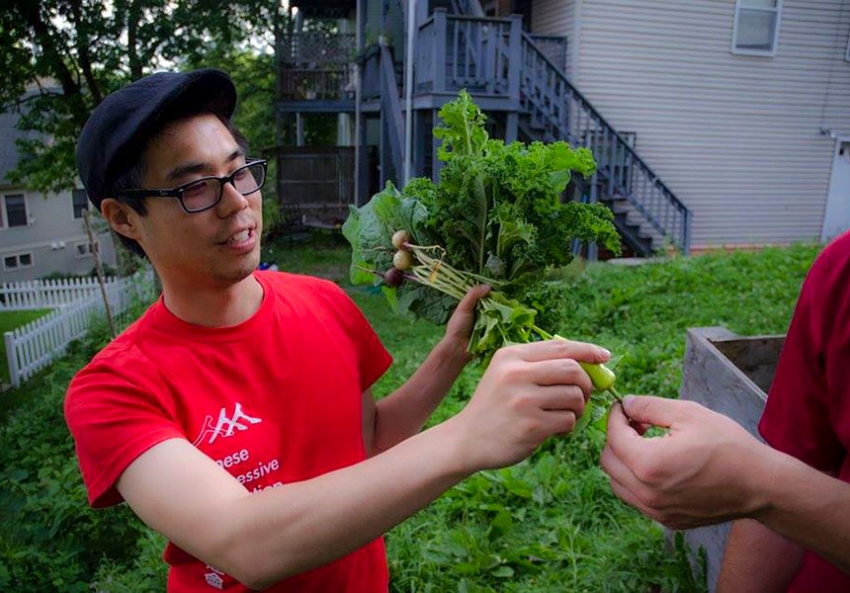 Experiments in funding an equitable economy.

The Boston region has one of the nation’s most thriving economies, with job growth above the national average, thanks in large part to the academic and healthcare sectors. But the benefits are not shared equally. The median income for white households is more than twice that of Latino households, and nearly twice that of black households.

To address these inequities, a patchwork of Boston organizers are working to create a “solidarity economy” (SE)— an economy that, as the U.S. Solidarity Economy Network (USSEN) phrases it, “puts people and planet first” and is grounded in principles of solidarity, democracy, sustainability and equity in race, class and gender. It’s meant to be a pluralist approach, a flexible pragmatism designed to meet the needs of specific communities.

Boston is home to a diverse assortment of SE ventures, from employee-owned green businesses like Cooperative Energy, Recycling and Organics, which collects and composts food waste and sells the soil to farmers, to the Greater Boston Community Land Trust Network, a patchwork of community-owned tracts that offer affordable housing, urban agriculture and other services oriented toward the public good.

These and other SE initiatives are documented in “Solidarity Rising in Massachusetts: How a Solidarity Economy Movement is Emerging in Lower-Income Communities of Color,” a report released in February by the Massachusetts-based Solidarity Economy Initiative. The report also highlights potential obstacles faced by SE ventures. As one practitioner put it, “We all grew up in capitalism and there are traps in our minds.”

One ongoing challenge is to get funding without compromising on principle. Conventional lenders can be reluctant to provide start-up capital, and many SE practitioners don’t trust the banks much anyway, so the sector often ends up relying on wealthy donors or foundations. This raises its own issues. Once you secure such funds, how do you make sure that community members, not funders, retain control over their projects? How do you incorporate democracy into investing and workplace decisions when, as Penn Loh, one of the authors of “Solidarity Rising in Massachusetts,” puts it, “[democratic] muscles are atrophied in our culture”?

In an effort to build up those muscles, the Boston Ujima Project is working to create a democratically controlled investment fund to help businesses in Roxbury, Dorchester and other Boston neighborhoods primarily home to poor people, immigrants and people of color.

At its August 2016 Solidarity Summit, Ujima gave this vision its first test run: Five black- and/or immigrant-owned ventures made their case directly to a crowd of roughly 200 for a total of $20,000 in zero-interest loans. Everyone in attendance—mostly local activists and first-time investors, many of them people of color—got a single vote, regardless of how much money they had invested. After discussion and deliberation, they voted by text message to approve all five funding requests.

Half of the investment money had been crowd-sourced from around 175 community members (at an average of just over $50), and the other half came from a small group of nonprofits dedicated to advancing the SE, who had agreed to match local funds. One of these funders, the Boston Impact Initiative, also committed to repaying 20 percent of the investment if the recipients fall through.

Noah De Amor, who secured a loan for his Dorchester bike shop, calls the interest-free Ujima money “the right kind of debt” because it comes from people he knows and trusts in his community—in contrast to conventional bank lenders.

To help ensure the community retains power over outside investors, project leaders are hoping to give the final say in investments to neighborhood assemblies in target communities. That, according to Ujima organizer Aaron Tanaka, combined with the “one vote regardless of donation size” rule and the Solidarity Summit’s public nature, will help keep the initiative democratic. He hopes the unusual face-to-face process can increase accountability, ensuring that businesses and communities understand what they do and don’t want from each other. “It’s uncomfortable, and that’s the point,” he says.

Funding is just one area where principles and realities can clash, says Emily Kawano of USSEN. A related struggle is ensuring that the movement is rooted in and truly controlled by people in low-income communities and communities of color—that the wealth and education of many of its leading organizers is used to build power among people who lack it, and not to perpetuate privilege among those who already have it. This can be difficult, Kawano admits.

In her own work with Wellspring Upholstery, a worker-owned cooperative in Springfield, Mass., she’s seen this tension first-hand. For some of the more technical aspects of upholstery, Wellspring had to bring in workers from outside its target communities of low-income people of color. “We’ve had a lot of clashes around that,” she says.

Another issue is that effective communication and conflict resolution—soft skills that are essential to deliberative democratic processes—aren’t developed in many school systems. “It’s not necessarily in our culture,” Kawano says. “We aren’t used to cooperating in our workplace, or taking responsibility.”

Still, Kawano calls herself “a lifelong pessimist” who nonetheless feels optimistic about the SE. While it won’t appeal to “diehard believers in capitalism,” she says, the SE’s strength is that it can connect with everyday people through “mainstream American values of independence and self-determination and democracy,” manifested in structures like worker-owned businesses. “It’s not coming from on high, it’s not a theory, it’s not a blueprint coming out of highly educated brains. It’s rather looking at what exists and what works that align to these principles and trying to pull it together.”

“If anyone tells you they know the one path to revolution,” Penn Loh says, “they’re probably wrong.” The more that decisions are contested publicly and democratically, he believes, the more that bad outcomes can be avoided. “Process is the answer,” he adds. “Democracy is really fucking hard, but it’s worth it.”