After Centuries of Housing Racism, a Southern City Gets Innovative 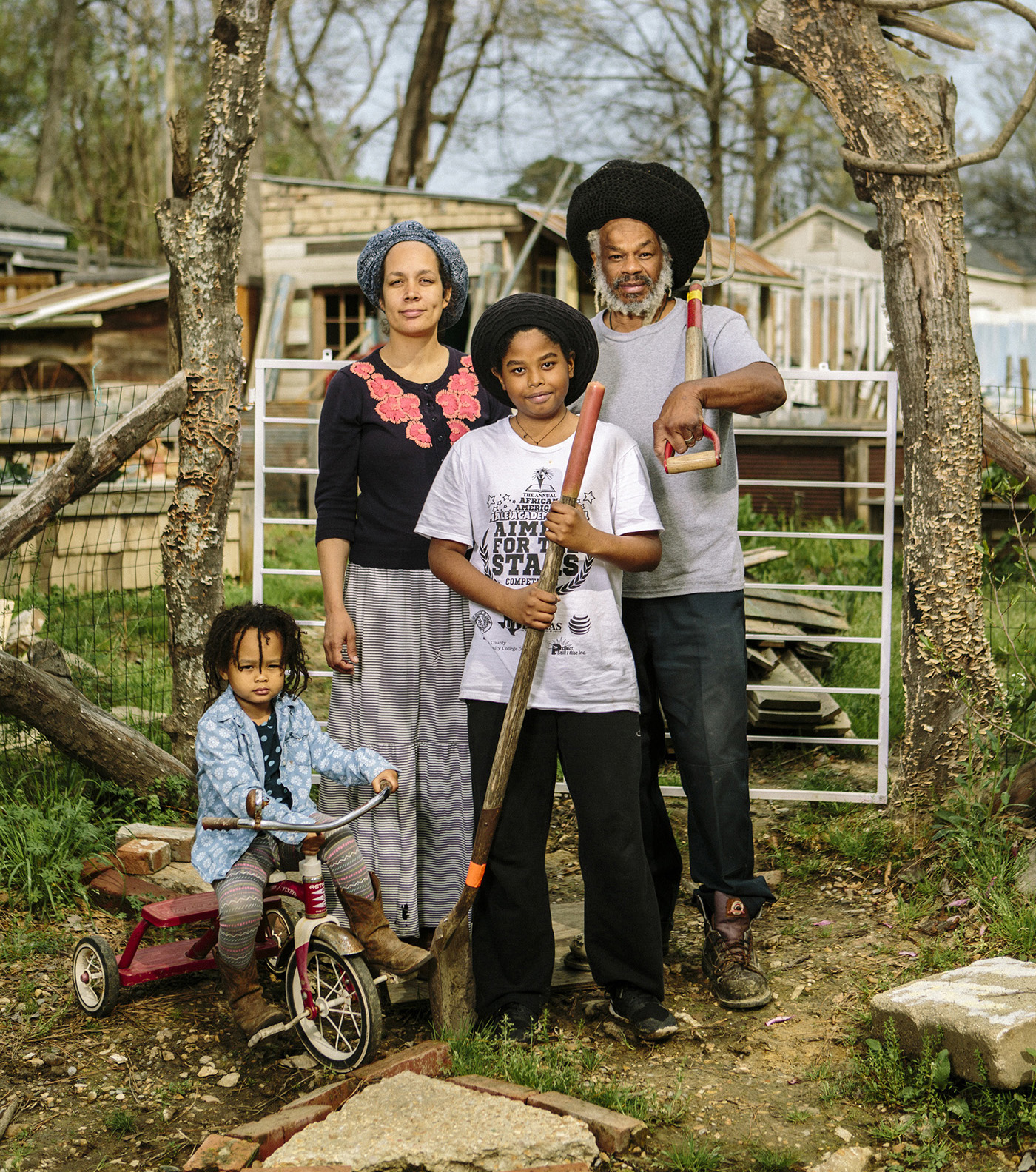 After Centuries of Housing Racism, a Southern City Gets Innovative

In Jackson, Mississippi, community land trusts are key to fair and affordable development.

By Adam Lynch via Yes Magazine

Denise Fitzgerald’s property abuts the string of quiet, empty lots that line Ewing Street in Jackson, Mississippi. Recently she was leaf-blowing detritus shed by the enormous sycamore tree dominating the yard of her tidy Habitat for Humanity home. She says she’d cut the tree down herself but knows it’s big enough to take out both her house and the house beside her if she dare try it.

Fitzgerald is familiar with the empty lots of Ewing Street, just a few blocks from Jackson State University. She’s lived here since 2008, and she remembers when Ewing was a series of derelict buildings smeared across the neighborhood.

Only two empty houses remain. The rest is a collection of oak and hackberry trees, with some untamed vines.

There is some human intervention, however. Every other week volunteers with Cooperation Jackson, a local workers’ cooperative that owns the lots, pick up litter. Cooperation Jackson has big plans for the street, and Fitzgerald stands behind them.

“I would like to see all that over there with new homes with people in them,” Fitzgerald says, pointing across the street. “It’s been either a mess or empty over there since I got here, and that would be a nice change.”

Once a thriving neighborhood before the 1980s, the area is now CJ’s proposed site of a series of price-capped homes and gardens organized into a community land trust that it hopes will form a tight-knit community. Cultivating an intimate community in Jackson’s neglected western territory is no easy feat, however. The mean annual income in the area surrounding Ewing, according the Census Bureau, is about $22,000.

Concentrated poverty is measured by the percentage of poor individuals living in high-poverty neighborhoods, and for Black people in Mississippi, that rate is 29.7 percent—made possible, in part, by a long history of discrimination. Until the 1968 passage of the Fair Housing Act, U.S. lending institutions restricted Black families from many home loans.

Since family wealth commonly manifests in home value, those discriminatory housing practices essentially robbed whole generations of minority families of capital that White families had access to for decades. Even the Fair Housing Act couldn’t prevent more recent redlining and the roping of middle-class Black families, or “mud people,” as one Wells Fargo employee called them, into subprime loans, despite their eligibility for standard loans.

Cooperation Jackson wants to clear some of that damage by giving people the transferable wealth of affordable homeownership. Officials know they are not up against a series of unlucky social accidents, however. This is the colossus of American apartheid, and they’ll need more than just affordable housing to make real relief stick.

“When you think about shifting an economy away from one of profit to one that’s for the people, you have to think of the whole thing as an ecosystem,” said Sacajawea Hall, operations coordinator for Cooperation Jackson. “People need food, but they also need jobs and housing. The community land trust is a crucial part of a whole ecosystem.”

A community land trust works by reducing the price of property that would otherwise be out of reach for people or families with modest incomes. A CLT typically sets the house price for each subsequent buyer through a formula. Some formulas are based on an average 1 percent annual index, added to the price the last buyer paid for the home, while others are based upon appraisals, or an index/appraisal mix. The CLT retains ownership of the land, thus allowing those price controls to remain in place permanently. In exchange for a more modest return on the sale, the buyer receives a manageable mortgage that a bank or mortgage company is willing to work with at their income level.

The National Housing Institute points out, however, that the homeowner is not guaranteed the formula-determined price, particularly in the event of plummeting property value. The fixed resale value also means less wealth-building through the sale of the home, which can’t be cashed out at a market rate. The more modest equity resulting from this arrangement could also make the homeowner less eligible for a home equity line of credit for rare family emergencies. (Instead, CLTs generally set up repair and reserve programs for the occasional roof replacement or broken water heater.)

Hall acknowledges that the typical CLT plan comes with drawbacks, but pointed out that many residents would not be eligible for homeownership outside of a price-capped model. She said Cooperation Jackson’s model also allows participant homeowners to take advantage of a community environment where often-overpriced goods and services can be made affordable through sharing.

“The owners get to be a part of a financial ecosystem, a larger web,” Hall said. “There will be resources available through co-ops that provide goods and services, like childcare, and an interconnectedness that keeps resources in the community instead of getting lost outside of the community.”

Even with a percentage of profits from the sale of a home going back into the community trust, however, most CLTs still have to deftly manage the gap between the affordable price they set for the property and the development costs of creating it. That’s where a subsidy, either from private donors, grants, or government aid, typically comes in.

Hall’s organization, for example, operates the Freedom Farms urban farming cooperative, is expanding its Café and Catering Cooperative, and is developing the Green Team recycling and composting cooperative. Just across the street from Cooperation Jackson’s Capitol Street headquarters lies property that Hall hopes will house a community production co-op with a 3D printing lab. The organization is gathering donations and volunteers, and has brought in pro bono grant writers and legal document preparers to make it all happen, but Hall said she anticipates revenue from the various cooperatives will help sustain the overall effort.

“We’re hoping, with the original money we’ve raised, that we can do a couple of houses and sell them,” Frame said. “Then we’ll have money to do a couple of more houses, and grow like that. If we can rehab on a three-month window, then by the end of a year, you might have eight to 10 houses with people living in them. It’s slow growth, but once you prove you can do it, that makes it easier to raise funds and get better at it.”

With its unhurried progress and low profits, the CLT model holds little appeal to a banking industry dedicated to profit. While homeowners buying CLT property may use traditional 30-year mortgages to finance their homes, CLT organizers themselves have to find inventive ways to buy the land they plan to renovate, largely without bank participation.

In 2015, the Detroit nonprofit Storehouse of Hope’s Community Land Trust financed the purchase of properties with the help of a GoFundMe campaign. The effort raised more than $108,000 to prevent foreclosure on several senior citizen and single-parent households, even as the housing crisis felled whole neighborhoods.

Athens Land Trust, in Georgia, renovates and sells affordable homes, but it also trains independent farm owners and minority farmers in sustainable land management, conservation, and production-boosting farming techniques. While the trust uses the help of donors and the proceeds from home sales to close the gap between home prices and renovation costs, it funds the sustainable farming component of the organization with revenue generated through sales of produce from CLT-owned farms, and by charging fees to vendors at the trust’s West Broad Farmers Market.

“We have about 20 other vendors at the farmers market, producing baked goods, prepared food, crafts, soap, eggs—all that stuff,” says Kelsey Thompson, the education director at the Athens Land Trust.

Many state and municipal governments acknowledge the value of reducing blight and spurring the economy through price-capped land management. The city of Boston bought into the neighborhood revitalization plan offered by the Dudley Street Neighborhood Initiative in 1987 and dedicated $134 million to the endeavor. The Florida legislature also got on board with the idea and passed the Sadowski Act in 1992 to commit a 10 cents-per-$100 surcharge on every real estate transaction to a fund earmarked for affordable housing.

Government money isn’t reliable, however. Florida legislators, under Gov. Rick Scott, have annually raided the Sadowski Affordable Housing Trust Fund to finance state tax cuts, snatching $1.3 billion out of the $1.87 billion collected over the last 10 years. This, despite Miami ranking as one of the country’s least affordable cities.

Some CLTs, including those in less supportive states like Mississippi, have never enjoyed government participation.

“We are existing in a genocidal condition,” says Nia Umoja, lead organizer of Cooperative Community of New West Jackson. “We need to find lasting solutions for the deep-seated social challenges we face within our community—the distrust, the self-hatred, the miseducation, the despondency, the economic disparities—so that the most vulnerable can take advantage of the opportunities we are unable to see now.”

The organization successfully assembled itself alone and under the radar, without much intervention beyond the hard work of its members. Still, Umoja admits that “nobody knows yet if the CLT structure will work for communities here in Jackson.”

What seems clear, however, is that the CLT model works best when it’s self-sustaining, like One Roof Community Housing, in Duluth, Minnesota, which also cuts costs in home rehabbing like CCNWJ, except through a subsidiary.

“We handle the purchasing of the land, while our construction company [Common Ground Construction] does the home building and renovation,” One Roof Director Jim Philbin says. “They’re a professional contractor, but we’re able to get better pricing with them rather than a general contractor because they’re, well, a part of us.”

Some CLTs have mastered the art of revenue generation. Jackie Keogh, fund development manager of Portland, Oregon-based Proud Ground, says her group financed its property purchases in 2016 with the help of real estate brokers who donated their sales commissions from market-rate sales. Proud Ground is still the only nonprofit brokerage in Oregon, and it continues to maintain itself through commission fees. This adds up when the CLT has more than 280 homes in its portfolio.

“We make about $100,000 annually from that, and it goes to fulfill our mission to subsidize some of our affordable housing. The more homes in your portfolio, the greater number of leases and transactions you collect,” Keogh says.

Some CLTs have to go “way outside the box” to fund themselves, says Jason Webb, a former CLT operator and current training specialist at Grounded Solutions Network, an organization that educates groups looking to create their own CLTs. He predicts that the model will become more sustainable now that federal lending agencies like Fannie Mae and Freddie Mac have announced their willingness to embrace CLTs. Banks, he says, also are learning that CLT-orchestrated mortgages are astoundingly stable, with very few homebuyers walking away from their financial commitments.

“The demand for affordable housing will always be there, and now, with these additional resources opening up, we’ll be able to get more folks into their homes faster,” Webb says. “Every one of the 100 homeowners that I personally put into a home [as a CLT operator] went through a traditional bank to get a 30-year conventional mortgage, and those mortgages are some of the safest investment vehicles at those banks.”

Regardless of CLTs’ proven track record, Hall says, Cooperation Jackson still has a steep hill to climb over the next few years on funding, however creative the funding options may be. The group learned recently that the soil at Ewing Street isn’t very suitable for gardening, and is now mulling over whether to begin soil remediation to make the farming component of the Ewing community feasible. Still, she says, a groundbreaking shouldn’t be too far into the future.

“Looking at the financing and business planning for property development, I think we’re looking at the end of 2019 or 2020,” she says.