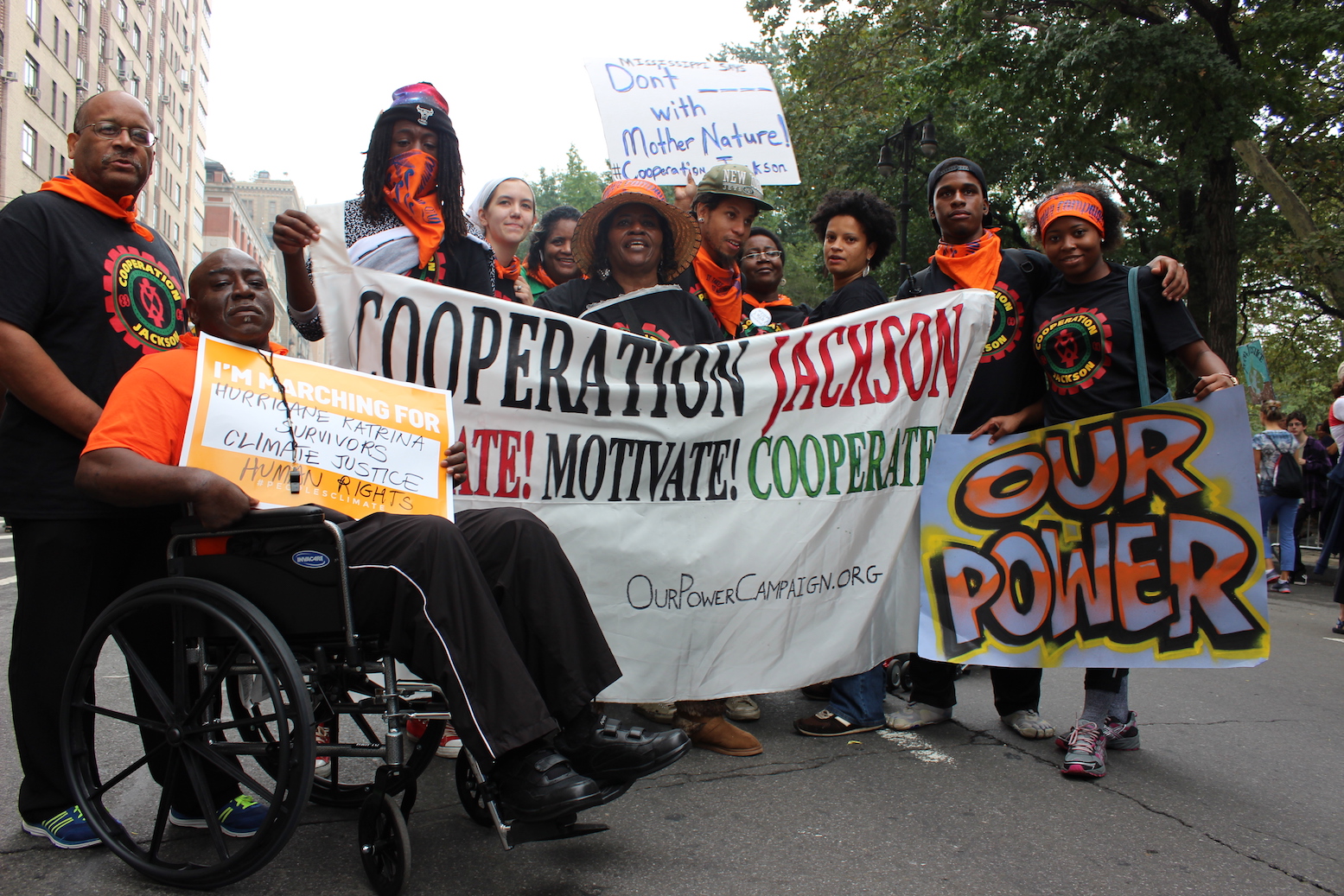 On November 9, people across the left woke up and wondered, “What do I do now? Under total Republican control, how does one fight for progressive change?”

Kali Akuno, the co-founder of Cooperation Jackson, a workers’ cooperative in Jackson, Mississippi, has been grappling with that question for years, and believes his organization provides a good model for progressives who still want to effect change under President Trump. When Donald Trump was elected, Akuno felt like he could tell the rest of the country: “Welcome to Mississippi.”

Jackson is located in one of the most conservative states in the country, with a legislature that seems actively hostile to the poor. Over the past few years, the state has passed some of the largest tax breaks in Mississippi history, leaving agencies that serve the poor, including schools, with even less money to help their constituents. And last year, a Republican state legislator hatched a plan to take over Jackson—either through a Detroit-style emergency management bill that would give the governor’s office near-complete control over the city, or piece by piece, starting with its municipal airport.

Mississippi also has the unfortunate distinction of having the highest rate of poverty in the United States, with a median income of just under $40,000 a year per household. The city of Jackson is worse off still: Its median household income is $33,000 per year. And the situation is even more dire for the city’s people of color, who make up the majority of the city’s residents: While the white population has a poverty rate of 14 percent, 34 percent of black Jackson residents are poor.

Despite all this, or perhaps because of it, Jackson has been a battleground for civil rights for decades. Many of the most famous protests of the civil-rights movements took place here. So did some of the era’s greatest tragedies, including the murder of Medgar Evers. Nonetheless, it’s rarely been a center of black political power—until a few years ago. That’s when longtime black radical activist, Chokwe Lumumba, was elected mayor of the city. He took office in 2013 with a mission to institute an ambitious plan to help elect black, progressive leaders throughout Jackson, and help foster a new, black-centered economy in the city. Unfortunately, he died less than a year into his mayoralty.

But the original ambition behind Lumumba’s election remains, in the form of a group of local black radicals who’ve organized under the banner of Cooperation Jackson.

Cooperation Jackson is a workers’ cooperative, started in 2013, that is striving to be a one-stop-shop for activism and economic development in the city. So far the co-op is small: a farm, a couple-dozen plots of land, a little over 100 dues-paying members, and a community center. But it’s aiming to be much more. The organization’s mission isn’t to just help Jackson residents, but to give them an entirely new, supportive economy in which to operate. The idea is essentially this: Since Jackson’s current economy isn’t working for its residents, and its current political system isn’t doing much to help, why not create a new economic and political system right alongside the old one?

“We want to become the dominant feature of our local economy,” Akuno told me over the phone. “It’s really about a localization of the economy, about maximum control in the community’s hands. These are the things we can do that protect us from the ravages of global capitalism.”

Co-ops of course aren’t a new idea, but Cooperation Jackson is unique in its comprehensiveness, its ambition, and its embrace of radical black politics. Akuno says he appreciates the work of other co-ops: There are plenty of examples of well-run economic alternatives to dominant economies, from a worker-run laundromat in Cleveland to the countless food co-ops throughout the United States. But many shy away from explicitly political goals. Cooperation Jackson, by contrast, wants to use worker-owned and -managed companies to create an economic alternative for black Jackson residents outside of capitalism, especially in an era of conservative political rule.

“We’ve learned how to implement and incite change without the support of most policy leaders,” Akuno says. “That’s a lesson the left is going to need to learn.”

As of now, Cooperation Jackson operates Freedom Farms, an urban-farming collaborative, and the Chokwe Lumumba Center for Economic Democracy and Development, a community center and small-businesses incubator. The organization is currently building out a café, has a catering operation, and is buying up vacant lots to create a community land trust—a nonprofit organization that manages land to ensure that it remains affordable as prices of commercially https://modafinilsmart.com owned land fluctuate. It currently owns 25 plots and hopes to purchase 50 more in order to create a village of sustainable housing for low-income residents. The goal is to “decommodify as much land as possible,” says Akuno, as Jackson, like so many cities, undergoes a round of gentrification. They’re also starting a fund-raising initiative to build a production and fabrication center—essentially a flexibly configured factory that can be used for small-time manufacturing. So far nearly all of this is being funded by donations.

If this all sounds incredibly ambitious, it is. But it’s not without precedent. One of Cooperation Jackson’s inspirations is Mondragon, in Spain, which runs 261 businesses, 101 of which are cooperatives, and has just under 75,000 employees. (Most of Mondragon’s products are niche and industrial, but if you’ve purchased camera equipment, you’ve probably encountered Mondragon’s Kide brand.) Mondragon is often held up as an example of what worker cooperatives can do. It is relatively competitive with more traditional capitalist ventures, yet its entry-level workers start at about $32,000 per year, according to a 2015 interview with Josu Ugarte, the company’s director of international operations, and its managers are not allowed to make more than six times the salary of a worker. But it’s not without its critics, most of whom point out that operating a cooperative business in a capitalist economy means that the co-ops eventually have to mimic more exploitative capitalist practices in order to survive in the marketplace. As the writer and philosopher Phil Gasper points out, Mondragon doesn’t rank any better than similar private corporations in worker satisfaction.

That’s why Akuno envisions an entire economy of co-ops working together, and running independently from the dominant economy—co-op farms selling to co-op restaurants, co-op dry cleaners taking out loans from co-op banks. His dream is to create a “sister network” of co-ops across the globe, all working with one another to create an economy parallel to the one we live in but governed by different rules.

That goal might not be as far-fetched as it seems. A version of it already exists in Emilia Romagna, a region in Italy where several thousand interlinked manufacturing cooperatives have worked to support each other and turned the area into an industrial powerhouse. There’s also a deep history of cooperatives in the US going back to at least the early 1800s, including a black-led farmers’ cooperative in the South comprising 70 individual farming co-ops and currently representing 20,000 farming families. It has been operating for the last 40 years

All signs point to the co-op movement growing in the United States. According to one study, 60 percent of the 250 or so worker cooperatives currently operating in the country were formed after the year 2000. The biggest impediment to their future growth is that there’s not yet a way to ensure their sustainability; they have neither the size of Mondragon nor the government support of a place like Emilia Romagna, where the regional government has assisted in creating service centers to help keep each of the small manufacturing cooperatives up-to-date on product trends, pricing, and manufacturing techniques.

“You don’t have the closing of the loop,” says John Duda, the communications director for the Democracy Collaborative, an organization dedicated to supporting the development of co-ops and other vehicles of shared ownership. “You don’t have the economic activity to feed into the next generation.”

Akuno says the way to get there is to politicize co-ops so that they’re not just operating in a bubble, but as a cohesive system. That’s especially important under Trump, he adds.

“It’s not just about surviving,” he emphasizes. “We want to build a new economy, a new society. In order to do that, you have to survive, but you have to also grow and reach out and change people’s minds in the process.”

Akuno’s background is in politics and protest. He was part of the Malcolm X Grassroots Movement, a large, multi-city community organization that advocates for black liberation and the end of white supremacy. Four years ago, he helped elect Chokwe Lumumba as mayor of Jackson. He’s now hoping to bring that political experience into the cooperative world, to convince people that working together with shared responsibility isn’t just an economic task.

“People think running a business isn’t political,” Akuno says. “But business is the most political thing there is.”

Peter Moskowitz is a writer based in New York City. He covers issues of race, the environment and LGBTQ rights. He is the author of How to Kill a City, published by Nation Books in Spring 2017.

In this episode we explore a phenomenon that has existed throughout centuries both within and alongside Capitalism. Wherever relationships...

A sneak peek of the Solidarity Economy Fair in Madrid, June 14th 2015 By Gaia ParadisioHuffington Post...